A few years ago the research of our group mainly focussed on pharmacogenetics of biological treatment in rheumatoid arthritis. We published the first genome-wide association analysis for anti-TNF treatment outcome and the first large-scale genetic study using other disease outcome measures as proxy for the standard clinical outcome measure.

Concerning implementation studies, we lead the world-wide largest randomized controlled trial for cost-effectiveness of thiopurine-S-methyltransferase genotyping prior to thiopurine treatment in inflammatory bowel disorders patients. This study showed that pre-treatment genotyping results in a statistically significant reduction of leukopenia without any additional costs. A similar multicentre study ongoing in psychiatry focussing on cost-effectiveness of pharmacogenetic testing prior to tricyclic anti-depressant treatment. Within the department of Human Genetics, we are also responsible for diagnostic pharmacogenetic testing. 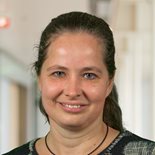 We have several aims:

Several discoveries were made by our research group. Some are mentioned here. read more
Listen

We proved that prior-to-treatment TPMT genotype-guided dosing followed by dose adjustment results in a statistically significant decrease in myelotoxicity (p=0.011) in patients carrying a genetic variant in TPMT (PMID:26072396). In addition we showed that this intervention is cost-effective (PMID: 30698675). However, not all cases of the life-threatening myelotoxicity nor other severe ADRs, can be prevented by pre-emptive TPMT genotyping therefore we performed several other studies to investigate if other factors can explain these cases (PMID: 28914446, 28644183, 28045129, 27943397, 27402913, 29120908).