Annemarie Boleij, theme Tumors of the digestive tract and colleagues recently published an article in the prestigious journal Science.


Patients with an inherited form of colon cancer harbor two bacterial species that collaborate to encourage development of the disease, and the same species have been found in people who develop a sporadic form of colon cancer, a study led by a Johns Hopkins Bloomberg~Kimmel Institute for Cancer Immunotherapy research team finds.

The Science findings describe a process in which these bacteria invade the protective mucus layer of the colon and collude to create a microenvironment—complete with nutrients and everything the bacteria needs to survive—that induces chronic inflammation and subsequent DNA damage that supports tumor formation.
These new findings by Cynthia Sears, M.D., professor of medicine, and a researcher at the Johns Hopkins Kimmel Cancer Center’s Bloomberg~Kimmel Institute, are built upon her earlier research showing that particular strains of bacteria can invade the colon mucus in at least half of patients who get colon cancer but have no inherited predisposition for the disease. Unlike most bacteria, which do not make it past the colon’s protective mucus layer, these communities of bacteria that invade the mucus form a sticky biofilm right next to the colon epithelial cells that line the colon, where colon cancer usually originates. There, Sears and colleagues propose that these bacterial communities may eventually help the epithelial cells to become cancerous
Ultimately, once better understood, drugs or vaccines to prevent colonization of these bacteria in the colon, and potentially even probiotics to chase the bugs from the colon are preventive measures that could be explored to interrupt the cancer-promoting process.

Link to Science publication
Link to news article in Dutch

Fewer cancer diagnoses during the COVID-19 epidemic in the Netherlands

7 May 2020 In a commentary in Lancet Oncology Iris Nagtegaal, theme Tumors of the digestive tract, published, together with Thijs Merkx, as head of the IKNL, the latest data that illustrate the impact of the pandemic on the detection of new cancer patients. read more

Lieneke Steeghs about the PATH project: Predictive Analysis for Therapy

22 March 2019 Read here the article 'PATH makes predictive molecular diagnostics in cancer unambiguous', of Lieneke Steeghs, theme Tumors of the digestive tract, that was published on the website of ZonMw. read more 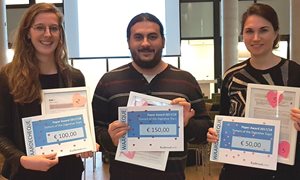 21 February 2019 This year’s Valentine’s day in the Radboudumc was focused on the RRR of the Tumors of the Digestive Tract. In the biannual Paper Award session the big prize went to Daniel Garza from the Center for Molecular and Biomolecular Informatics, for his paper on “the environmental metabolome”. read more

A personal touch of Iris Nagtegaal

10 February 2019 In order to promote interaction amongst colleagues within RIMLS, we have a ‘personal touch’ series setting employees in the spotlight. A light-hearted manner to learn about the colleagues you know and those you don’t! This week: Iris Nagtegaal. read more 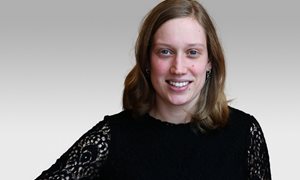 11 December 2018 The goal of the stipendium is to enable junior female scientists to perform research abroad and to encourage them to pursue a scientific career in academia. read more
