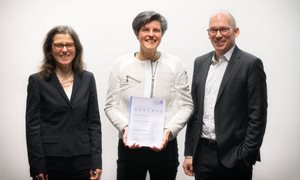 Barbara Franke is awarded an honorary Adjunct Professorship at the Goethe University in Frankfurt am Main in Germany.

Franke is the first woman to have received such an honorary appointment among a total of six scientists appointed ​in the past 15 years.
Her research is directed at understanding the biology of psychiatric disorders, especially that of ADHD and autism in children and adults.