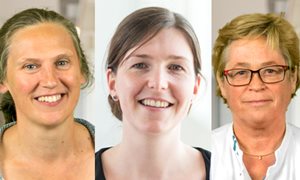 Women with epithelial ovarian cancer (OC) have a higher chance to benefit from PARP inhibitor (PARPi) therapy if their tumor has a somatic or hereditary BRCA1/2 pathogenic variant. Current guidelines advise BRCA1/2 genetic predisposition testing for all OC patients, though this does not detect somatic variants.

Marjolijn Ligtenberg, Janet Vos and Nicoline Hoogerbrugge, theme Tumors of the digestive tract, and colleagues, assessed the feasibility of a workflow for universal tumor DNA BRCA1/2 testing of all newly diagnosed OC patients as prescreen for PARPi treatment and cancer predisposition testing. They have published their findings in the Journal of the National Cancer Institute.

Tumor BRCA1/2 testing was performed for 315 (77.6%) of the 406 eligible OC samples, of which 305 (96.8%) were successful. In 51 of these patients pathogenic variants were detected (16.7%). Most patients (88.2%) went on to have a genetic predisposition test. BRCA1/2 pathogenic variants were shown to be hereditary in 56.8% and somatic in 43.2% patients. Participating gynecologists and patients were overwhelmingly positive about the workflow.

They concluded that universal tumor BRCA1/2 testing in all newly diagnosed OC patients is feasible, effective and appreciated by patients and gynecologists. Because many variants cannot be detected in DNA from blood, testing tumor DNA as the first step can double the identification rate of patients who stand to benefit most from PARP inhibitors. 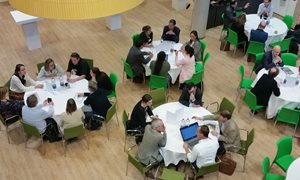 2 December 2019 Within the Academic Alliance, the Maastricht UMC+ and Radboudumc are already working together in several areas. And this is happening in more and more fields. On 27 November researchers from both umc's met during the fourth Exploration meeting, this time with the theme: Oncology. read more

4 April 2019 In agreement with the existing policy the research board and Radboudumc Center for Oncology have decided to continue with the mandatory internal review procedure for KWF grant applications. read more

19 December 2018 In agreement with the existing policy the research board and Radboud Center for Oncology have decided to continue with the mandatory internal review procedure for KWF grant applications. read more
