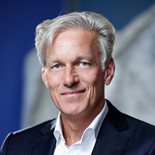 Paul Smits (1957) was promoted and trained as an internist in Nijmegen. As a staff member at the Internal Medicine department of Radboudumc, he started his research on clinical pharmacology, hypertension and diabetes mellitus. In 1995 he was appointed professor of Pharmacology and head of the department of Pharmacology-Toxicology of Radboudumc. Five years later he became a trainer for the field of clinical pharmacology within internal medicine. He was dean and vice chair (2012-2019) and chair (2019) of our Executive Board.

From 2008 to 2012, Paul Smits was the scientific director of the Nijmegen Center for Evidence Based Practice (NCEBP) research institute. In that period he was also chairman of the board of the 'Instituut Waarborging Kwaliteit en Veiligheid' (IWKV), member of the Medicines Evaluation Board (MEB) and member of the Health Council's Consultation Group on Medicine.