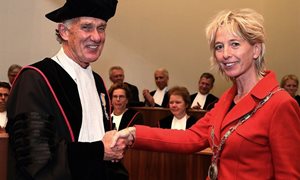 On Thursday 1 November at 5:30 pm, a Royal Decoration was awarded to Koos van der Hoeven, Professor of Medical Oncology, in the Aula of Radboud University.

After giving his final lecture, Van der Hoeven was named a Knight in the Order of Orange-Nassau. He was decorated by the second deputy mayor of Nijmegen, Grete Visser.
Koos van der Hoeven was awarded the Royal Decoration in appreciation of his extensive work aimed at improving healthcare for cancer patients and for the impressive work he has done in oncological research.

The professor was praised for his efforts to optimise healthcare for young cancer patients and for representing the interests of these young patients. His efforts have led to the recognition of the importance of continuous attention to and support for these young people. Van der Hoeven was also praised for his role and involvement in the national discussion about making expensive medicine available to cancer patients.

The Royal Decoration was awarded after Van der Hoeven’s publicly held final lecture entitled ‘There is still much to be done’. 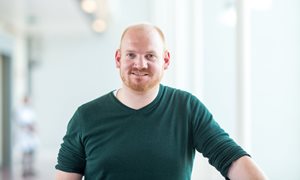 Radboudumc, with the University of Colorado, ClaudicatioNet and Harteraad, has developed a method to better treat people with intermittent claudication. This method, by RIHS researcher Thomas Hoogeboom among others, enables physiotherapists to coordinate the care process with the patient better. 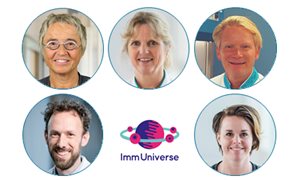 In this project (31 mEURO), RIMLS and RIHS researchers collaborate with 25 European partners on dissecting common disease mechanisms of Ulcerative Colitis and Atopic Dermatitis.

Nina developed a prediction model for change in quality of life one year after ICU-admission.

Incomplete excision of tumor tissue negatively affects the prognosis of the patient. RIHS researcher Mark Rijpkema and colleagues are working on the development of new dual-labeled tracers and currently are implementing this into the clinic.

RIHS researcher Fütterer is an interventional radiologist and an expert in the field of cancer imaging techniques, image-guided interventions and robotics. He is also Professor at the Robotics and Mechatronics Group at the University of Twente. 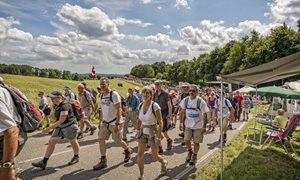 Researchers pay attention! The Dutch Research Council (NWO) is looking for researchers to contribute to its outreach festival Expeditie Next, which will have an area at the Four Days Marches party (Vierdaagsefeesten).