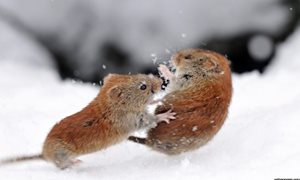 In recent work published in Current Biology, April 14th, Sabrina van Heukelum and her colleagues from the department of Cognitive Neuroscience of the Radboudumc, in collaboration with universities in Germany, the UK and the US, showed that in mice, anterior cingulate cortex​ (ACC) dials down excessive aggression, but leaves context-appropriate aggression intact.

Imagine standing in line at the supermarket when somebody cuts right in front of you. What do you do? Tell them to please join the back of the line? That is probably useful. Punch them in the face? Not so much. This example illustrates a simple principle: Aggression is a basic and useful aspect of behaviour – if used in proportion. Given how crucial the appropriate use of aggression is, it may come as no surprise that a whole network of brain areas is tasked with controlling aggressive behaviour. One prominent area within this network is ACC, but its precise behavioural function was unclear so far.