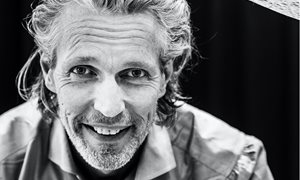 Over seven million people worldwide have Parkinson's disease, and it is the fastest growing brain disease in the world. There are so many different forms that personalized treatment plans are needed. This is what Radboudumc neurologist Bas Bloem writes along with international colleagues in a review article published in The Lancet.

In the article, published on World Parkinson's Day in the scientific journal The Lancet, researchers Bas Bloem, Michael Okun and Christine Klein indicate that personalized treatment plans for patients with Parkinson's disease are needed because of the variety of symptoms and complaints. "Seven million people, seven million variants of Parkinson's," Bas Bloem points out. "In everyone, the disease manifests itself differently." The best known symptoms are trembling and slow movement. But problems with sleep, mood and sexuality, among other things, can also be part of it. Parkinson's is not yet curable, nor is it possible to slow it down. However, more and more treatments are available to suppress the symptoms of the disease."

Still more research needed into the cause

The cause of Parkinson's disease is not yet known, but it is becoming increasingly clear that several factors play a role. There is strong evidence that most people are affected by a combination of a certain hereditary predisposition (genetic factors) and external influences (environmental factors). In 10 to 15% of Parkinson's patients, the genetic predisposition appears to play a major role. In these people, the disease often starts at a young age, and there is often a familial form of Parkinson's disease. If there is no hereditary predisposition, it is called a sporadic form.

Map research: where do patients with Parkinson's live?

In addition, Bas Bloem also sees enough evidence that there is a relationship between the use of chemical (pesticides) and Parkinson's disease. He explains this, among other things, in this lecture for the University of the Netherlands. There is more and more evidence for this. In France, the condition is even a recognized occupational disease among farmers. "We now know that, for example, wine growers have an increased risk of developing this disease," says Bloem. "The areas in France where a lot of grapes are grown correspond exactly to the areas where Parkinson's is common." In the Netherlands, too, there will now be a 'Map study', to accurately depict where Parkinson's patients live. This should provide more insight into the role of pesticides in the development of Parkinson's disease.

More knowledge needed about our food

For it now seems that the risk of developing Parkinson's after exposure to pesticides is highest for farmers, who after all come into direct contact with these pesticides. But the risk to local residents is also likely to be increased. In any case, it is clear that pesticides can be found in measurable concentrations in the homes of people living near fields where pesticides are used. These agents can also get into our food in very small concentrations. This could possibly increase the risk of Parkinsonism, but, as Bas Bloem points out, this really requires further scientific research. The Board for the Authorization of Plant Protection Products and Biocides 'College voor de toelating van gewasbeschermingsmiddelen en biociden' (Ctgb), which assesses whether substances are safe for humans and nature, has called for this in a letter to the European Food Safety Authority (EFSA). The Parkinson's Alliance, a coalition of Parkinson's disease care providers (ParkinsonNet), Parkinson's (patients) Association, academic hospitals, technical universities and a newly established Parkinson's Disease Fund (ParkinsonNL) also calls for more research into the causes of and possible treatments for Parkinson's disease.