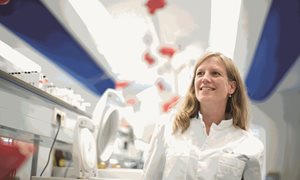 As of 1 March 2021, Nielka van Erp has been appointed Professor of Cancer Pharmacology at Radboud university medical center/Radboud University. Her research focuses on optimizing cancer treatment by tailoring the dose and treatment  on differences between patients, with the aim to optimize treatment efficacy and reduce overt adverse effects.

Hospital pharmacist and clinical pharmacologist Nielka van Erp conducts research on the pharmacology of cancer drugs. In her research, she focuses on personalizing and optimizing cancer treatment. She does this by studying the relationship between biomarkers and the pharmacokinetics of different anticancer drugs. In addition, she focuses on the translation of findings from preclinical tumor models to final tumor concentrations in patients with cancer.

Her goal is that cancer patients receive the right dose and the most effective medication. This varies from person to person. In one patient, the same dose leads to much higher concentration in the blood than in another patient. While it is known that at very high concentrations more adverse effects occur and at very low concentrations the drug may not work properly. There is a certain window, where the side effects are tolerable and the therapy works optimally.

Strategies to optimize the exposure of anticancer drugs

In addition, Nielka van Erp studies pharmacological strategies that improve the uptake of cancer treatments or inhibit the excretion (elimination of drugs) with the aim of making the treatment more tolerable and affordable. For example, the ingestion of anticancer drugs with food has been studied which improved their absorption and allowed a lower dose to be used. Nielka van Erp is also investigating whether less variation in blood concentration of the drug is seen when anticancer drugs are combined with powerful enzyme inhibitors (boosters). In that case, a lower dose of medication may be sufficient. These types of pharmacological interventions can be easily applied in clinical practice and have a major impact on health care costs. Her oncology-pharmacology research group is internationally known for their scientific results in this field.

Nielka van Erp (1977, Liempde) studied Pharmacy at the Utrecht University. She obtained her PhD at the LUMC in Leiden (title of thesis: Clinical Pharmacology of the tyrosine kinase inhibitors imatinib and sunitinib). Since 2012 she works at the Radboud university medical center, since 2017 she is a clinical pharmacologist. She received several grants, including a grant to study the relationship between biomarkers and pharmacokinetics of newer anticancer drugs used for prostate cancer. She also works on an implementation project in which dose individualization based on blood concentration measurements of three known anticancer drugs will be implemented as standard care.

As a hospital pharmacist she is responsible for pharmaceutical oncology patient care for patients with cancer treated in the Radboud university medical center. She is a member of the influential committee that evaluates the added value of new registered drugs, treatment methods and treatment indications in the field of medical oncology. She is also the founder of the website Cancer Drug Interaction.