Henk Stunnenberg and Mihai Netea: two top-researchers in their separate fields and each highly acclaimed. Yet, also known as an entity, in the halls of RIMLS. And no wonder, for they have been doing collaborative research on immunology for some eight years now with great outcomes. With a joint grant awarded them in 2017, their collaboration is not likely to end any time soon.

Q1 How did the two of you come to join forces?

“Within internal medicine I was studying infectious diseases,” Mihai explains. “To continue my line of research I needed to know more about molecular processes in the nucleus of cells. Sometimes as a scientist you have to understand where your boundaries are and ask for help. One possibility is to – by yourself – try to understand all that is needed to know about molecular biology, but then it’s likely you’ll have to make all the same mistakes first. It’s so much more efficient to work together. So, I asked Henk to help me.

And I’d always said that I’d do research in any field except immunology,” Henk says. “And now here I am – thanks to Mihai – researching immunology. When I started investigating molecular and epigenetic approaches to unveil the complexity of the processes in the nucleus of the cell, we couldn’t easily apply these approaches to primary immune cells. However, technology has changed enormously, we can apply the newest methods on very small amounts of cells and dive deeper into it revealing the enormous complexity which aroused my curiosity.”

Q2 What are the benefits and the difficulties of collaborating?

Mihai shrugs: “At most choosing a direction. You cannot research everything. Sometimes there are three or four ideas but you can only carry out one. But if one of us feels strongly about an abandoned idea, we research it in our own subgroup.”

“We meet when we need to; to discuss results or to design plans. Our expertise complement one another’s. We don’t know the details of what the other does, but we know more of each others fields than we used to.”


Henk and Mihai worked together on the BluePrint project that generated at least 100 reference epigenomes, which increased our understanding of underlying processes of health and disease. Now they have joined forces in the project Epigenetic targeting for prevention of sepsis-induced macrophage tolerance in humans. They were awarded the ZonMW Top grant, worth € 675,000 for this project.

Q3 How does it feel to be able to continue your collaboration?

We still have a long way to go. But we'll get there.
Mihai: “Well … a top grant is very nice, but it’s relatively limited. There’s much better funding for other areas than infections, unfortunately.”

Henk: “I thought it would have been easier getting funding when the benefits for patients are more clear and there’s less focus on the molecular.”

Mihai shakes his head: “No. I sometimes feel that it’s all about funding the next big and fresh idea. But research is more than that. It takes three to four years to discover how important a new concept is and another ten years or so to understand how that knowledge can be translated into treatments that can benefit patients. We still have a long way to go.”

Henk: “The first phase often shows how little we actually know. I love how the more you uncover and the better our technological methods become the more complex a problem gets. I mean: if it were easy, it wouldn’t be any fun.”

Mihai: “If it were easy, it would have been discovered already.”


Last year, Henk was appointed as Knight in the Order of the Dutch Lion by His Majesty. And in 2016, Mihai was awarded the Spinoza prize.

Q4 Is this recognition something you continue to strive for?

The two men quickly glance at each other with raised eyebrows, after which Henk says: “I would have preferred the Spinoza prize. Why? Because the Spinoza comes with money with which to do research. Don’t get me wrong: I was honored by the recognition. It’s nice to know that the university nominated me and appreciates the work I do. But it’s not something I strive for. I won’t be putting it on my CV, for example.”

“The Spinoza prize really is an honor and it gave me great opportunities in my research,” Mihai says. “At the end of the day, though, it’s not why I do research. I want the work I do to make a real contribution. You have to be your own judge on the importance of your work. Given the choice of winning a prestigious award for something I knew was of little scientific significance or of discovering something truly groundbreaking and getting no acknowledgement, I would definitely choose the latter. No question.”

Henk nods in agreement. “For me it’s all about the science for science and gaining insight. I want the freedom to follow where the data leads me and not be worried about what it might be used for. That,” he says pointing to Mihai, “is for the clinical researchers.”

“Yes, I want my work to directly benefit patients but like Henk I’m curious about how things work and that drives us both.”

Radboud Institute for Molecular Life Sciences Organization Annual Report 2017 Grants
Numerous grants were acquired by our outstanding researchers. We are delighted with these accomplishments. The most significant grants awarded in 2017 are represented on this page.

In this video, Michiel Vermeulen talks about his recently acquired ERC Consolidator grant. He also explains what he hopes to achieve with this grant. 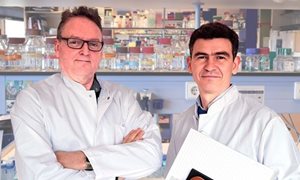 For several years, these two prominent researchers have performed great research together with groundbreaking science as a result. What makes their collaboration so successful?

Master and apprentice reveal their passion about their virus research. Additionally, they will cover what can be learned from the PhD supervisor of the year.

A selection of Horizon 2020 grants obtained by our RIMLS researchers is presented here.

A selection of personal grants obtained by our RIMLS researchers is presented here.

The magnesium journey through the renal cell: how to get out?
Jeroen de Baaij, Renal disorders.
Awarded: € 250k

A selection of other grants obtained by our RIMLS researchers is presented here.

KWF. Towards prediction of the outcome of cancer immunotherapy. Carl Figdor.
Awarded: € 700k