Radboud Institute for Molecular Life Sciences Organization Annual report 2018 Grants 2018
Numerous grants were acquired by our outstanding researchers. We are delighted with these accomplishments. The most significant grants awarded in 2018 are represented on this page.

Alain van Gool and Peter-Bram 't Hoen talk about the X-omics initiative. This grant allows them to facilitate a large-scale research infrastructure. What role does Radboudumc play?

Throwback to a great research year for Gert Jan and Simon. Not only a Vidi grant for Simon, but also a publication in Nature Genetics and they received a TOP grant of NWO. 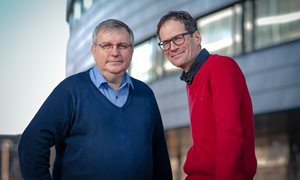 Bioinformatician Martijn Huijnen and biochemist Ulrich Brandt have been collaborating for several years now. They appreciate each other’s rigorous work ethic as well as creativity. Their collaboration has resulted in a joint ZonMw Top Grant worth € 675,000.

Bioinformatician Martijn Huijnen and biochemist Ulrich Brandt have been collaborating for several years now. They appreciate each other’s rigorous work ethic as well as creativity. Their collaboration has resulted in a joint ZonMw Top Grant worth € 675,000.

Q1 The ZonMW Top Grant is a joint grant. What are you researching together?

“Mitochondria, as the power plants of the cell, play a central role in disease and health,” Martijn explains. “Mutations in the more than 1,200 genes that control the mitochondria lead to dysfunctioning of the cell and cause mitochondrial diseases. Although these mutations all lead to a disruption of the energy system, there is a large variation in the disease course between patients. Moreover, not all organs are affected to the same extent. Why are certain regions in the brain damaged, while others are not?”

“Our research,” Ulrich continues, "focuses on understanding the molecular mechanisms underlying this variation. We focus on the proteins and protein complexes within the mitochondria. We aim to develop techniques to determine how the variations in the presence of proteins and their interactions correlate with the severity of the disease. With this knowledge, we can better intervene in the cell to cure mitochondrial diseases.”

Q2 You conduct fundamental research. Did that make getting a grant more difficult?

“This is the second time we applied with this idea. The difference is that we are now focused on a specific mitochondrial disease and how it expresses in different tissues and cell types. That wasn’t the case in the first proposal and was possible by getting Susanne Arnold as a specialist for tissue-specificity aboard,” says Martijn.

“We’re applying a newly developed complexome profiling approach," Ulrich says. "Another goal of this project is to set up a database to store the results. We're going to make this database public. Crucial is that the database only stores data that has been gathered with the complexome profiling technique. Promoting the approach and method will also be a big part of our activities. It also means that researchers everywhere can use the gathered data later.”

Q3 Some people say that besides discipline and knowledge you also need a bit of luck in such a big project. Do you agree?

Both men snort and chuckle. Martijn is the first to answer. "It's as the saying goes: luck favors the prepared. Of course, you have a surprise finding, but you have to know it's interesting. Good scientists expect to see the unexpected."

Ulrich agrees, adding, "Bad scientists do an experiment, and when they don't get the results they expected, they say "Oh no, let's try it again." When a good scientist gets unexpected results, he knows he has to look deeper."

“That’s what our collaboration is a bit about,” continues Martijn. “As a bioinformatician, I look at the data. You can sometimes let the computer help you systematically, but you can't let it talk for you. Need a biochemist to understand what we see; to think it through."

Q4 How would you describe one another? What makes your collaboration work?

“I would describe Uli[VD1]  as a hardcore German biochemist,” Martijn says. “He’s meticulous and very focused on getting the details right. He’s also stubborn at times and speaks his mind,” Martijn adds, smiling. Ulrich seems satisfied with that description.

"Martijn is good at creative science. Problem is many bioinformaticians are set in their ways. Martijn stands out because of his willingness to dive deeply into experimental data. His searches always stay rooted in experiment and reality. He has great focus and perseverance.”

“I think Uli is much more rigorous and cautious, whereas I just tend to jump ahead too quickly.”

“No, no, I don’t think so. Martijn is rigorous and cautious too. It depends on the field. You tend to be more cautious in your own field because you've learned to be. You've made mistakes and know what to watch out for. But that's the beauty of multidisciplinary work. You're thorough and focused, but that can give blind spots. Someone from another discipline will see something very differently. You have a little fight about it and then agree."

Q5 What do you hope to achieve with this grant?

Ulrich is more hesitant. "Well… we, of course, hope for a breakthrough, but you cannot predict getting one of those. So, we really cannot say what we’ll discover. We aim to assess the state and dynamics of multi-protein complexes in health and disease. That’s what fundamental sciences is all about and that’s how you get a kick out of it.”

Martijn chuckles, “See, I told you, he’s much more cautious.”

In this video, Bastiaan de Galan and Cees Tack talk about the major European grant worth € 26 million for research into hypoglycemia.

Solving rare diseases. That is what Alexander Hoischen is working on as workpackage leader in the international network SOLVE-RD.

A selection of Horizon 2020 grants obtained by our RIMLS researchers is presented here.

Infectious diseases & global health and Tumors of the digestive tract

Tumours of the digestive tract, Reconstructive & regenerative medicine and Nanomedicine

A selection of personal grants obtained by our RIMLS researchers is presented here.

Cleaning up cancer with our own immune system.
Kalijn Bol, Cancer development and immune defense. Read the interview.
Awarded: € 80K to visit Center for cancer immune therapy in Copenhagen.

A selection of other grants obtained by our RIMLS researchers is presented here.

Tumors of the digestive tract

Tumors of the digestive tract