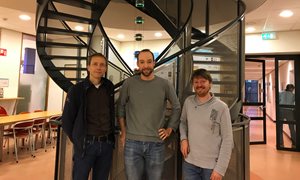 Gijs Overheul, Pascal Miesen and Ronald van Rij, dept. of Medical Microbiology, theme Infectious diseases and global health, have elucidated the mechanism by which a DNA virus evades small RNA-based immunity of the host. They have published their results in PNAS.

Host immunity exerts strong selection pressure on viruses, often leading to the evolution of viral mechanisms to evade or suppress the immune response. It is well established that RNA interference (RNAi) is a potent antiviral immune system against RNA viruses. As a counter-defense, RNA viruses often encode proteins that suppress the RNAi response. RNAi also targets DNA viruses, but the antiviral effects seem to be modest.

Using the fruit fly Drosophila melanogaster and a large DNA virus of insects (IIV6) as model system, the research group of Van Rij, including former PhD candidates Walter Bronkhorst and Rob Vogels, has studied the complex interactions between virus and host RNAi. The researchers now show that wildtype IIV6 is indeed mostly insensitive to RNAi, but that an IIV6 mutant lacking its RNAi antagonistic protein becomes extremely sensitive to RNAi. Thus, RNAi is in fact strongly antiviral against DNA viruses, but virus-encoded immune antagonists can fully mask this antiviral activity.