Newly synthesized mitochondrial RNA is concentrated in structures juxtaposed to nucleoids, called RNA granules, that have been implicated in mitochondrial RNA processing and ribosome biogenesis. They showed that two classical mtDNA replication factors, the mtDNA helicase Twinkle and single-stranded DNA-binding protein mtSSB, contribute to RNA metabolism in mitochondria and to RNA granule biology. Twinkle colocalizes with both mitochondrial RNA granules and nucleoids, and it can serve as bait to greatly enrich established RNA granule proteins, such as G-rich sequence factor 1, GRSF1. Likewise, mtSSB also is not restricted to the nucleoids, and repression of either mtSSB or Twinkle alters mtRNA metabolism. Short-term Twinkle depletion greatly diminishes RNA granules but does not inhibit RNA synthesis or processing. Either mtSSB or GRSF1 depletion results in RNA processing defects, accumulation of mtRNA breakdown products as well as increased levels of dsRNA and RNA:DNA hybrids. In particular, the processing and degradation defects become more pronounced with both proteins depleted.

These findings suggest that Twinkle is essential for RNA organization in granules, and that mtSSB is involved in the recently proposed GRSF1-mtRNA degradosome pathway, a route suggested to be particularly aimed at degradation of G-quadruplex prone long non-coding mtRNAs. 10 February 2020 Pharmaceutical company Khondrion, a spin-off from Radboudumc, has taken another important step in the development of its drug sonlicromanol. The first patients have used the drug as part of a phase 2b study, which focuses on determining the optimum dose and efficacy. read more 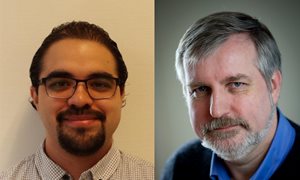 Tweaking the gearbox of mitochondrial complex I

1 November 2018 Alfredo Cabrera-Orefice, Ulrich Brandt and colleagues, theme Mitochondrial Diseases, concluded in Nature Communications that the movement of a critical loop of subunit ND3 located at the ubiquinone-binding pocket of respiratory complex I is required to drive proton pumping. read more