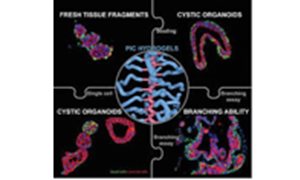 In the latest edition of Advanced Science a multidisciplinary team of RIMLS and Radboud University researchers from the Radiotherapy & OncoImmunology (ROI) Laboratory, the department of Cell Biology, the Institute for Molecules and Materials and the department of Experimental Urology, has published on the development of a novel organoid culturing platform. The platform uses a synthetic biomimetic matrix based on polyisocyanide that can support the long-term growth of mammary and prostate gland organoids. Due to the minimal nature of the matrix, it can be adapted to control differentiation and stem cell capacity of the organoids, making this an excellent model for in depth studies into organ development and for application in disease models.

In the last decade, organoid technology has developed as a primary research tool in basic biological and clinical research.

The reliance on poorly defined animal-derived extracellular matrix, however, severely limits its application in regenerative and translational medicine. Here, a well-defined, synthetic biomimetic matrix based on polyisocyanide (PIC) hydrogels that support efficient and reproducible formation of mammary gland organoids (MGOs) in vitro is presented. Only decorated with the adhesive peptide RGD for cell binding, PIC hydrogels allow MGO formation from mammary fragments or from purified single mammary epithelial cells. The cystic organoids maintain their capacity to branch for over two months, which is a fundamental and complex feature during mammary gland development.

It is found that small variations in the 3D matrix give rise to large changes in the MGO: the ratio of the main cell types in the MGO is controlled by the cell-gel interactions via the cell binding peptide density, whereas gel stiffness controls colony formation efficiency, which is indicative of the progenitor density. Simple hydrogel modifications will allow for future introduction and customization of new biophysical and biochemical parameters, making the PIC platform an ideal matrix for in depth studies into organ development and for application in disease models. 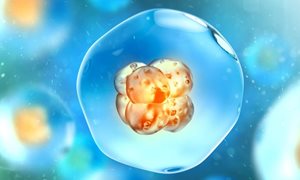