On Thursday, November 24, Arjan van Laarhoven received the Robert Sauerwein Medal. The medal is awarded every two years to a young researcher affiliated with a Dutch university or umc who has made a major contribution with research on tropical infectious diseases. The prize was awarded for the second time and consists of a bronze medal and a cash prize of €500.

During his research, he has collaborated with researchers from many different countries and backgrounds. He also worked in Bandung, Indonesia, for an extended period of time for his research. There he set up methods in the laboratory to conduct detailed research on the white blood cells in the blood and cerebrospinal fluid of patients with meningitis caused by tuberculosis. In addition to his innovative and relevant research, the selection panel for the Robert Sauerwein Medal especially praised him for how he trains and involves local researchers in his research. 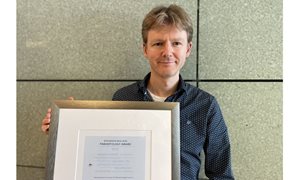 23 May 2022 Field research on the effectiveness of a malaria vaccine, came up with unexpected results for an international group of researchers including Benjamin Mordmüller of Radboudumc. The vaccine evokes a broader response against malaria proteins than there are in the vaccine. read more
