The Radboudumc receives 2.56 million Euros from the Dutch Cancer Society (KWF) for three studies to ensure oncological progress during COVID-19. The projects that have been awarded focus on innovative research into ovarian cancer and groundbreaking immunotherapy.

Women with an inherited error in the genes BRCA1 or BRCA2 have a greatly increased risk of ovarian cancer. They are advised to have their fallopian tubes and ovaries removed. This procedure is very effective, reducing the risk of ovarian cancer by 80-96%, but ovarian removal also leads to early menopause, with all its adverse consequences.
Joanne de Hullu, gynecologist, is investigating whether it is safe to remove the fallopian tubes (the presumed origin of ovarian cancer) first and only later the ovaries. The results of her previous KWF research show that this improves quality of life, especially in terms of menopausal symptoms and sexual functioning.
In a large international study, Joanne de Hullu is now going to further map the risks. Together with nine other countries, she is investigating how often ovarian cancer occurs in women who opted for the new approach and what their quality of life is like. De Hullu hopes to show that the risk of ovarian cancer remains the same, but that patients experience a much better quality of life.

There are also two studies that focus on immunotherapy. This research focuses on a groundbreaking treatment that helps the patient's immune system to clear cancer cells on its own.
Harry Dolstra, associate professor at the Laboratory of Hematology, is working on immunotherapy for ovarian cancer using 'natural killer' cells. He is investigating the possibility of growing these types of immune cells in large quantities so that they can be injected directly, rather than small amounts for each patient individually. In addition, these "natural killer" cells are equipped with a CAR (chimeric antigen receptor), which serves as a kind of "grappler'' that enables them to better recognize and clear cancer cells.

Gosse Adema professor of molecular immunology in the Radiotherapy & Oncoimmunology (ROI) laboratory of the Department of Radiotherapy, is researching sialic acids and their receptors. Sialic acids are sugars that cancer cells produce in increased amounts to protect themselves from attacks by the immune system. Gosse Adema is investigating whether the effect of immunotherapy can be improved by blocking these sialic acids or their receptors on immune cells.

The awards are part of the latest round of funding from KWF, in which more than 30 million Euros will be awarded to Dutch cancer research. 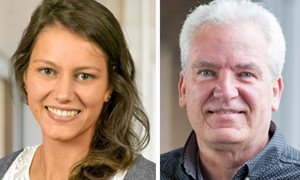